Challenging course conditions on Saturday on the Moose Mountain Links at Mall of America with several unmarked hazards and an unruly gallery wrecking havoc on both players as BK struggled out of the gate with double bogeys on four of the first nine holes.

KMJ seemed poised for a decisive victory reminiscent of the 2011 tour event in Leavenworth however a collapse on the back nine combined with a surge by BK resulted in a tie on the 15th hole and a narrow one stroke lead for BK heading into 18. 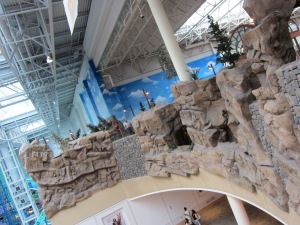 There, with just a single chance for glory BK sank a tricky 6 foot putt to seal the victory at this first stop of the mega mall swing on the 2012 tour.  The tour will continue the Mega Mall swing at West Edmonton  in early August.