so hard to catch up when you’re back in the real world.  Here’s the last two videos to hold you over until we get all the pictures up:

Going to the Sun Road

sort of – after several nights without electricty or internet, we find ourselves in West Glacier, MT for our final stop.   We’ve got a Kozy Kabin at the KOA with electricty and free wifi – woot!  As we catch up, here’s quick glimpse of what we’ve been up to:

The second and final leg of the North American Mega-Mall tour stops was played today on the Putt n’ Glow links at the mighty West Edmonton Mall.  As with the last stop at the Mall of America, KMJ jumped out to an early 4 stroke lead in the first few holes before BK settled into his game. 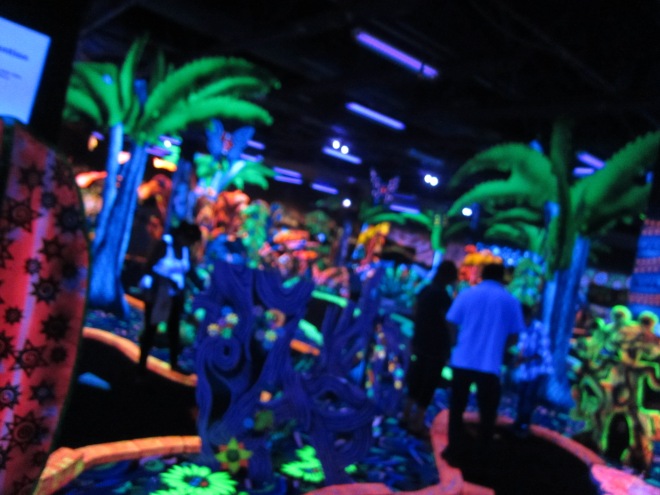 KMJ maintained a 3 stroke lead at the turn where a series of cunningly designed volcano style holes stymied both players with triple bogeys all around on three of the last 10 holes.  BK managed to pull within one with an excellent tee shot on 15 and then with his back to the wall sank a clutch hole in one put on the 16th while KMJ hit par but the score was tied going into 17.

On the 17th BK tapped in a birdie putt for the lead going into the 18th where both players triple bogeyed to end the match.  So far BK leads the 2012 tour with victories in Scottsdale, Minneapolis and Edmonton while KMJ took the season opener in Austin.

in Banff, we were keep ing a watchful eye out searching for bears everywhere, hoping for just a quick glimpse.   Since arriving in Jasper though we’ve already spotted three, lumbering around the sides of the road, munching on berries in various spots.  check the video! 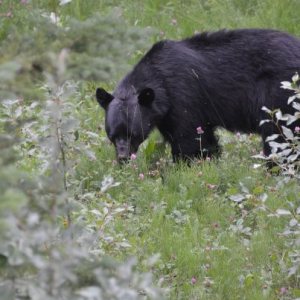 Then today, as we were leaving Mont Edith Cavell, we encountered a crazy hail storm – such a barrage I had to pull over and stop driving.   It lasted like 5 minutes and we ended up with a snow-like build-up on the car. check the video!

Once the hail passed, we continued on the road over to our campground for the night.   As we checked in the Ranger let us know that eight bears had been spotted roaming the area in the last 48 hours.  8!  We moved on, laughing nervously to check out our assigned space in loop 1, space L as in Lima.  It seemed like a nice space except for the puddle that had accumulated where our tent should go.

Who am I to disagree?  🙂  It’s given me internet access and time to edit a couple more videos for you to enjoy:

A couple more highlight videos are now up for you to enjoy:

BK has also started posting some of his awesome photos here.

Wildlife spotted so far:  a gazillion mosquitoes, a few squirrels, several chipmunks, geese, an eagle, a deer, a coyote, some big horn sheep.  Despite the sign below, we have yet to see a bear (which is probably a good thing). 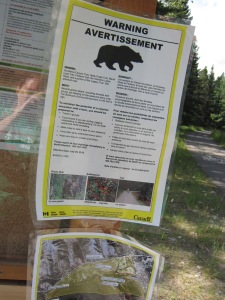 I blog!  ( how great is it to have free wifi at a campground?)

First day of vacation was a lot of driving. BK decided to commerate it by having us take a pic every hour to show our progress and capture spots along the way. Enjoy the slideshow below!