Our big dinner out in Spain, Arzak, was recently ranked the #9 restaurant in the world and it was great.  Very similar to Alinea in size and style, though much more casual and flexible which was nice.

We made a relatively early reservation by Spanish standards and arrived for dinner at 8:30 PM.  The small lobby/bar area downstairs reminded us of someones living room which makes sense I guess since Arzak looks to have been built into a house on a more suburban looking street about 5 minutes drive from the older part of San Sebastian where we’re staying.

We started with the house specialty cocktail, a white wine with amaretto and lemon (not sure if it was Limoncello or just lemon juice) but in any case it was crisp and really delicious.  They also had these crazy stretched out forks and spoons that were cool. 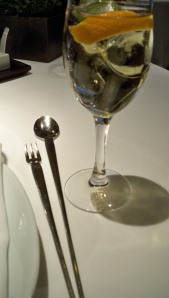 We both went with the tasting menu especially since they were very flexible and accommodating of personal preference.   It was clear that they really care about the customer and want everyone to have a great experience.  The waiter offered us some good suggestions that in many cases meant we’d be having different dishes which gave us a chance to try a wide variety of flavors.  And they were:

Amuse bouche
There were five different amuses’ brought out to the table and my first observation was that they have really creative and different presentations again, much like we saw at Alinea.  The dishes were a fish pudding wrapped with what I think was coconut, fried and served on a stick, a red bean and apple soup that started out sour and finished with a sweet apple pie kick, a popcorn and mushroom tart, a crispy black pudding and another crispy fish thing. 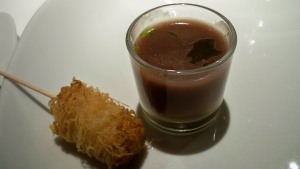 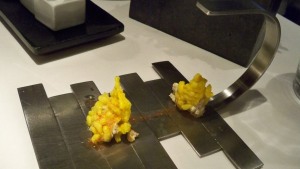 Foie Gras
I was expecting a piece of seared Foie Gras here, but what we got was totally different.  The warm Foie Gras was paired with onion, tea and coffee and was served upside down in a free form ice cream cone made of corn that smelled and tasted like a Bugle.  What you did was slide a spoon under the cone to keep the contents in place and then pick it up and eat it with your hand like well, and ice cream cone.  Foie Gras has always scared me but this was actually pretty good.

It was at this point that chef/owner Elena Arzak came out to say hello and chatted for a few minutes.  Turns out that she knows the former owner of Harvest Vine in Seattle – small world!

Lobster with crispy potato/White asparagus
There were two choices for this course and we opted to get one of each in order to try both of them out.  I’d never had white asparagus before and really enjoyed it, the flavor isn’t as sharp as the green asparagus and it was very tender served with a variety of different flavored mayonnaise’s on the plate.  The plating was very creative and playful, bringing in lots of color.

The lobster was pan fried then served in a dehydrated crispy potato shell.  Along with the lobster was what looked like a tomato but turned out to be a little ball of tomato juice encased in gelatin and some saffron leaves.  There was also a sauce they explained came from a brazilian tree, but tasted similar to a miso. 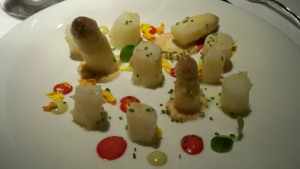 Egg of the moment/Crab with seafood sausage
BK’s next dish was the house specialty “egg of the moment” which was a runny poached egg with a variety of crispy and chewy additions.  The egg was cooked perfectly and the crispy fried breadcrumbs with I think some dried mushroom and other flavors that he thought were just outstanding.

Since I’m not a big fan of eggs if they’re not scrambled they substituted a crab dish instead.  This also came with a seafood sausage and what looked like a wilted lettuce was actually rice paper tinted green and sprayed with some anise.  The dish was good and we both thought it worked pretty well.

Monkfish/Seabass
The next course was again a choice between several different fish so we each got a different fish to try both.  BK had the Monkfish which aside from being delicious came with a great plating that just looked like a beach right down to coral, starfish and sand with edible clamshells made from sugar and gelatin.  This dish also came with a small bit of white asparagus and a rice paper cupcake liner with pureed green bean “pellets” that were small gel capsules filled with green bean.

I had a Seabass which was poached in olive oil and came with some fake walnuts and garlic, rather gelatin molds that looked like garlic cloves and walnuts but tasted differently. 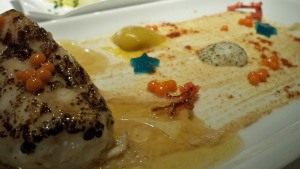 Lamb/Sole
For the meat course BK chose the lamb which was cooked a perfect medium rare and came with what appeared to be a marrow bone, but was actually a potato “bone” stuffed with mushroom “marrow”.  I have no idea how they made it, but it was tasty and the flavor there matched well with the sauce that came with the lamb.

Instead of meat I had a second fish dish which they said was sole but I think it was too fat and firm to be that.   Whatever it was, it was grilled and served with ginger oil, rich moist and delicious.

In addition was an assortment of chocolate ganaches with savory/spicy “chips” and a dark chocolate and rosemary ice cream.

The next course was probably the best bite of the night and involved a wax like  shell filled with lemon curd which they had poured some honey water over – we dubbed it Lemon Awesomeness.  This was just incredible and I’ll leave it at that. 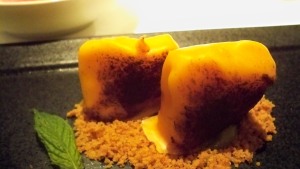 We also had fake walnuts which were waxy shells in the shape of walnuts but filled with a liquid center that you first dipped in a red wine reduction before eating surrounded by a dark purple sugar.

The final dessert course was a selection of sweets that included a crispy pineapple gumdrop, white bean paste with almond, chocolate with passion fruit and pimento, chocolate caramels, a beet confection and chocolate with ground corn nuts.  This latter one was so good we asked for and were given several more pieces.  Sweet and salty goodness. 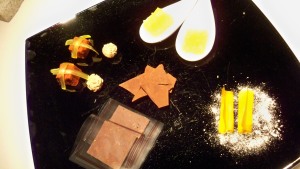 1st stop at Haizea (as seen on No Reservations) for Bunuelos de Bacalao and txakoli. 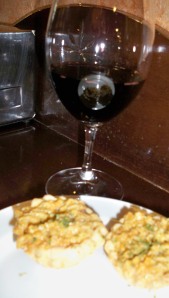 3rd stop after watching friday night futbol is at Txepetxa for croquettes and anchovies with urchin roe along with crianza. 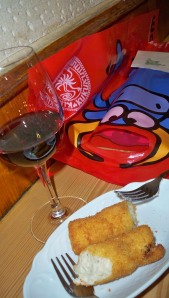 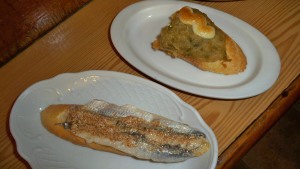 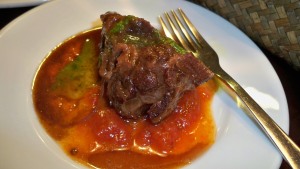 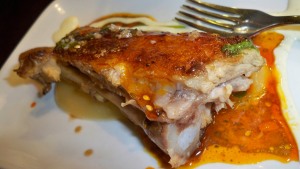 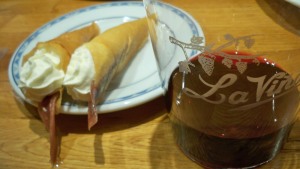 8th stop is La Cuchara for Foie con compota de manzana with Crianza to drink.  ( I got a little cocky with this after liking the foie last night.  This piece was too big and rich for me, I could only eat half.) 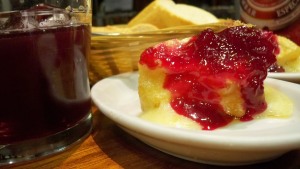 10th stop is Bar Aralar for jamon and blue cheese with sangria.