Rather than going extravagant in Portland we wanted to try a few casual joints we’d been hearing about.  First, we had a groupon for a tour & tasting at Eastside Distilling which was fun.  We had walked to the distillery but now with some bottle purchases we decided to try out our Car2Go card to get to stop #2, Big Ass Sandwiches, which is run by friends of friends but we had also seen on Man vs. Food.  The sandwiches were huge and delicious.

From there we squeezed back into the Smart Car and headed north to Salt & Straw for ice creams (and where BK expertly parked the tiny car into a tiny space): 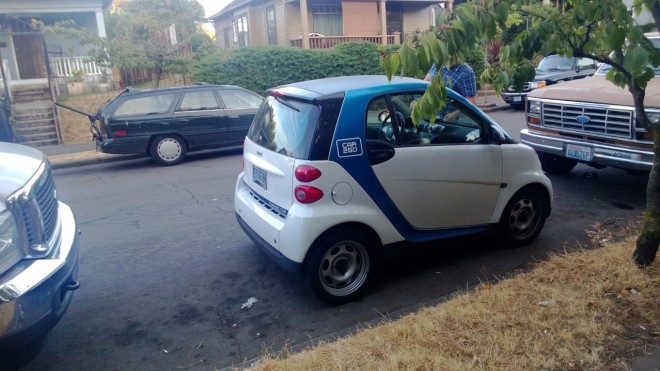 There was a long line at Salt & Straw, and lots of interesting choices – I sampled the goat cheese marionberry habanero and then the birthday cake blackberry whch were both intriguing but chose the almond brittle with salted ganache for my cone – what was most interesting was that the chocolate ganache was in chunks.  BK went with a stumptown coffee/burnside bourbon combo but decided he could make it better – I agree.  Mine was good, but BKs are pretty awesome.

In the morning, our last stop of the trip was Slappy Cakes where you get to make your pancakes (and when you think about it is a genius business plan since folks are paying you to cook their own breakfast).  We got some bacon, apples, goat cheese pecans and sausage to play with – the results were pretty delicious! 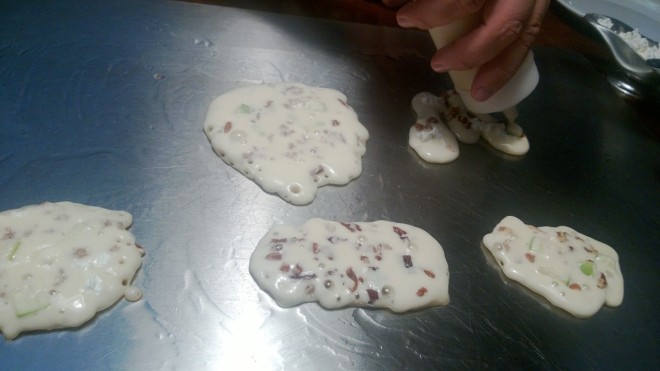